Punkin Shananaquet, a member of the Gun Lake tribe, holds a Gete Kosman squash at the Gteganes Farm in west Michigan. This squash, which until recently was thought to be extinct, is one of dozens of traditional crops being cultivated as part of a revival of foods native to the Great Lakes region. Courtesy of Jijak Foundation

An ancient variety of squash that was all but lost to history is now being rediscovered. Native Americans in the Great Lakes region have cultivated this squash for centuries, and now tribes are sharing the seeds with each other and with small farmers to bring the plant back.

An ancient variety of squash that was all but lost to history is now being rediscovered. Native Americans in the Great Lakes region have cultivated this squash for centuries, and now tribes are sharing the seeds with each other and with small farmers to bring the plant back.

Eighth Day Farm in Holland, Mich., is among those that acquired seeds from this mystery squash. And the farm's Sarah Hofman-Graham says they didn't know what to expect when they planted it last year.

"I definitely didn't have a firm idea of what kind of squash it was going to grow--or even what the plant was going to look like," she says. "It was just a fantastic surprise."

The seeds grew into massive bright orange squashes, each more than 2 feet long.

The seeds passed through a couple of pairs of hands before they got to the farm. But they started with Paul DeMain, a member of the Oneida Nation of Wisconsin and the editor of News from Indian Country. DeMain says his seeds originally came from the Miami tribe in Indiana and are thought to be from a line that's somewhere between 1,000 to 2,000 years old. 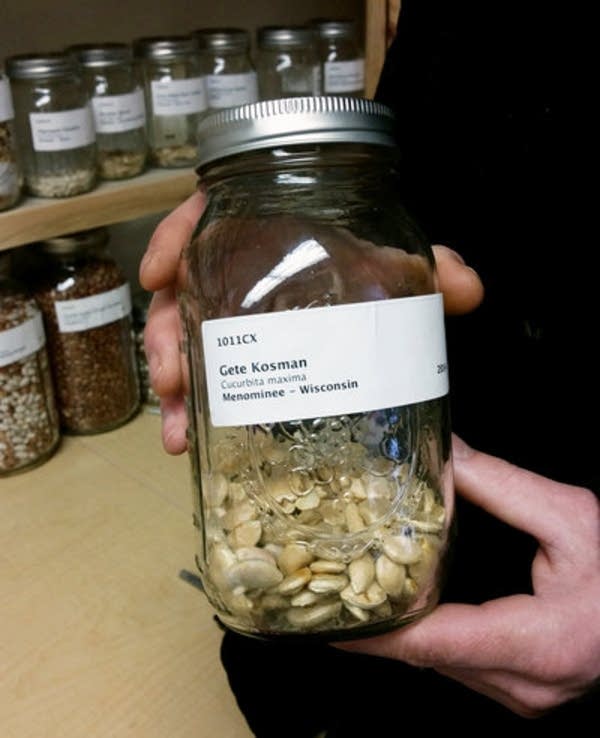 "The squash and the seeds that are going around now have provoked quite a bit of excitement in the native community because it is an indigenous seed," he says.

"There were seeds in it that were regrown," Demain says. "And allegedly these seeds were dated [to] about 850 to 900 years ago."

Some say the story of the clay vessel is an urban myth. But regardless, DeMain says people are excited to have these seeds back in circulation, and they've been sharing the seeds with each other over the past couple of years.

"As communities begin healing after a hundred years of decline — of displacement — it comes along with a revival of the language, the revival of songs and ceremonies," he says.

One tribe in Michigan wants to make sure these seeds stay around a lot longer.

Kevin Finney is the executive director of the Jijak Foundation — a nonprofit group that's part of the Gun Lake Band of Pottawatomi in Hopkins, Mich. Finney saves dozens of varieties of traditional crops in the band's seed library.

In a small basement room in the Jijak office, there are dozens of glass jars on wooden shelves, with native varieties of corn, beans, tobacco, watermelon and ancient squash. 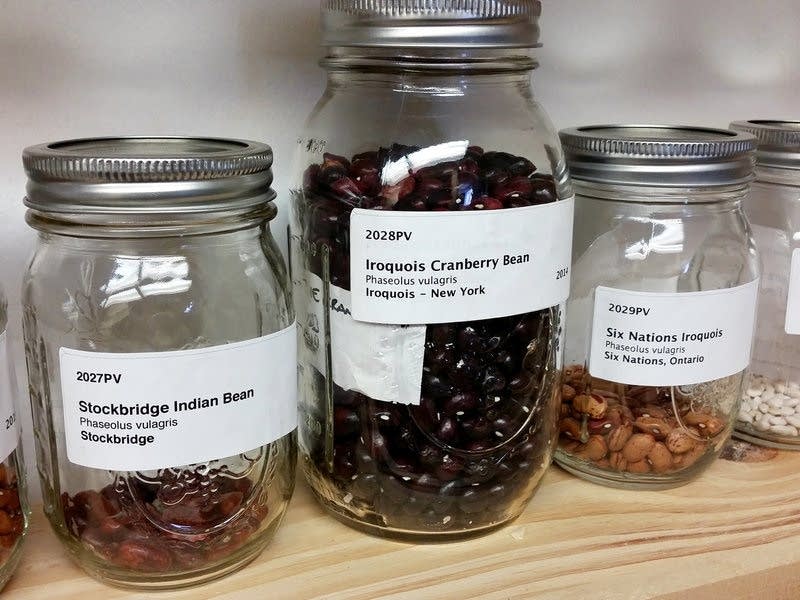 Finney opens a jar of the seeds of the ancient squash, called Gete Kosman: Gete means ancient, or something from a long time ago, and kosman is the word for squash.

"They're big, just like the squash. And they're "really fat, and that's a good thing for a seed," Finney says.

He calls the ancient squash "heroic."

"This squash has re-emerged. It's an ancient, lost and forgotten thing. It's a champion for all of these seeds," he says. "They were forgotten, and all of them are making their re-emergence again."

Finney says native farmers around the region can borrow seeds. "Like a library, they check out seeds. And they will grow a certain variety of corn or beans or tobacco or squash. And at the end of the year, they send us back a return on those seeds, as well as keeping some," he says.

When people check out a seed, they also get a copy of the oral history that comes along with the seed — things such as where the seed came from, stories from families about the seed and information about how it grows best.

Finney says he wants people outside the tribes to know about these foods, too.

Not only do the flavor and texture of butternut squash improve with time, they actually become more nutritious.

The tribe is also reviving traditional farming methods. While working in a greenhouse on the group's 200-acre farm, Yebishawn Old Shield says she thinks about how long the ancient squash seeds have lasted.

"There is spirit within those seeds," she says. "So that's why we want to keep revitalizing things like this, and keep building things like this, to provide for those next seven generations," she says. "And also thinking about those ones that were in the past seven generations, that because of them, we're here. Because of them, those seeds are still here as well."

She calls the work they're doing "food sovereignty" — growing their own food in traditional ways, on tribal land.