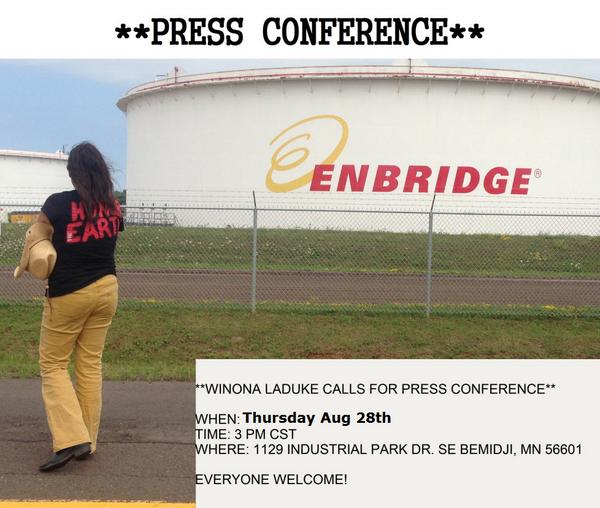 LaDuke and her team will be holding a press conference this Thursday, August 28th, at 3PM CST at the Enbridge headquarters, 1129 Industrial Park Drive SE, Bemidji, MN56601.

The epic horseback journey traversed SandyLake and RiceLake watersheds, the mother lode for wild rice in Minnesota. The proposed pipeline would divide the traditional wild rice beds from East to West.

Michael Dahl, Anishinaabe spiritual leader and rider explained, “This is the same path our ancestors walked. Now we are riding in those same footsteps. We are here to protect this land for future generations.”

LaDuke says “Enbridge chose a bad path. The people of Minnesota love their water more than oil and they are standing up against the pipeline. A single leak in the pipeline could discharge 20,000 gallons of fracking oil per minute. This could lead to an environmental catastrophe.”

Honor the Earth is gathering at the Bemidji headquarters of Enbridge to say no to any pipelines going through their lands. LaDuke will be onsite for questions and answers and invites all landowners that would be affected by the fracking oil pipeline, grassroots organizations, general public and all media outlets to attend.