Justice for Berta Cáceres - Murder of Honduran Indigenous and Environmental

Berta Cáceres, winner of the prestigious 2015 Goldman Environmental Prize, was a visionary indigenous and environmental rights leader. She championed efforts to protect indigenous peoples from large-scale development projects that are being advanced in Honduras without consultation of communities and without concern for the environment. She organized communities in Honduras and across the world against the unconsented extraction of natural resources and in defense of the Gualcarque River, a sacred site of the Lenca people and an essential water source, against the construction of the Agua Zarca hydroelectric dam. Berta Cáceres was a much-loved leader of the diverse social movements in her country. Members of Honduran civil society are united in sorrow and anger about her death—as are so many in the international community.

Berta Cáceres was killed on March 3, 2016 by armed men who broke into her home in La Esperanza, department of Intibucá, Honduras. Mexican environmentalist and journalist Gustavo Castro Soto of Otros Mundos Chiapas/Friends of the Earth Mexico and the Mesoamerican Movement against the Extractive Mining Movement was also wounded in the attack. We urge that Mr. Castro immediately be permitted to return safely to his country.

In the course of her work, Berta Cáceres suffered constant death threats against herself and her family, threats of sexual violence and assault, attacks and harassment. She was also the subject of continual legal harassment by judicial authorities and intimidation by security forces and local government officials for her work. In the six months before her murder, according to COPINH, the threats against her escalated and included shots fired at her car and verbal threats and messages, by members of the military, police, local authorities and representatives of the hydroelectric company.

Ms. Cáceres had precautionary measures from the Inter-American Commission on Human Rights (IACHR) since 2009 but never received the full protection she needed. We are outraged by statements from Security Minister Julián Pacheco that in effect blame Cáceres for the failure of the Honduran government to comply with its obligation to protect her. She is one of 15 human rights defenders who have been killed in Honduras while beneficiaries of IACHR precautionary measures, as reported by the Committee of Relatives of the Disappeared in Honduras (COFADEH). On March 5, 2016, the IACHR granted precautionary measures for COPINH, Berta Cáceres’ family and Gustavo Castro Soto, given the risk to their safety. 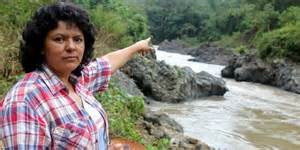