Stand With Standing Rock Against the Dakota Access Pipeline

Honor the Earth with Owe Aku are working from the Standing Rock reservation to challenge the Dakota Access pipeline. We have been involved in the opposition to the pipeline for the past few months, with our support for the Red Warrior Camp and the Sacred Stone Camp.  The situation is moving very quickly out there; and needs urgent attention. While thousands of people are on site at Standing Rock to oppose the pipeline; the North Dakota governor has called this a state of emergency.   This may allow for significantly more law enforcement and possibly the National Guard. 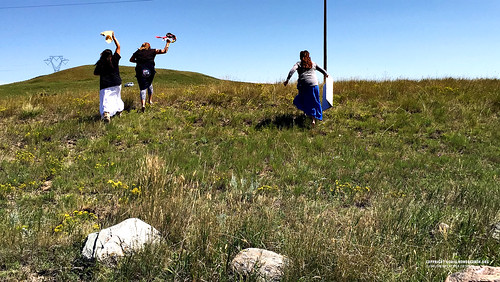 Background:   The Dakota Access Pipeline is a project of Energy Transfer Partners, with new partner Enbridge/ Marathon, who appear to be moving their interests out of the highly contested terrain of Anishinaabe territory of the Great Lakes. Honor the Earth has been deeply involved in this work, opposing the Enbridge lines for four years.   The Dakota Access Pipeline, began in May 2016, and, if finished will snake through the states of North Dakota, South Dakota, Iowa, and Illinois, where it will join up with a second 774-mile pipeline to Nederland, Texas.  More than 570,000 barrels of Bakken crude oil will pass through the pipeline per day after it is finished (projected in third quarter 2016), according to the U.S. Army Corps of Engineers.  That’s a lot of carbon.

The pipeline, which is a joint venture between Enbridge Energy Partners LP and Marathon Petroleum Corporation, would also span 200 water crossings, and in North Dakota alone would pass through 33 historical and archeological sites.  Initially, the pipeline was to run north of Bismarck, but because it proved to be a potential threat to Bismarck’s wellhead source water protection areas, the route was cancelled, according to the U.S. Corps of Engineers. The water of Standing Rock, however would be at risk.

l) The camp of 1500 plus people will need to remain a presence out in the territory.

2) 28 Arrests have occurred thus far for those opposing the pipeline. We expect many more.

3) The Standing Rock Tribe has filed a request for an injunction on the pipeline construction; this will be heard in Washington DC on August 24.  With relief, the situation will be diffused. Without relief the situation will escalate.

4) The Standing Rock Sioux Tribe has filed a lawsuit requiring an EIS for the proposed pipeline. Honor the Earth will join this lawsuit. That case has not stopped construction.  Standing Rock has also filed a motion at the United Nations.   We will need help with legal costs. Honor the Earth’s attorney Tara Houska will be providing much of this work, in coordination with other attorneys.

5) The major drill will be arriving on the shore of the Missouri River within weeks, if they are able to transport this heavy haul.  There will likely be more arrests; and direct actions.North Dakota officials were quick to point out that those opposing the pipelines had not been at all the public hearings in the state on the Dakota Access pipeline; but from having attended over 30 public hearings in Minnesota on the Sandpiper; and having seen clearly that our words were not part of the public record or decision making; it was not difficult to see how people do not believe the system would work; nor that in North Dakota, a place full of oil interests, that any Indigenous , or other voice of reason would have been heard. We must all work together. We are very pleased to see that the International Indian Treaty Council filed action at the United Nations.. That is the forum for the violations of treaties and the lack for due process and justice in the US court system.

I always remember what Chief Frank Fools Crow said; "the court of the thief."Let us hope for justice and let us work together. - Winona LaDuke, Ex. Director of Honor the Earth

Resistance continues, "What Would Sitting Bull Do Today? "Let us put our minds together and see what life we can make for our children," it is time to act.

Donate to Honor the Earth here.

Donate to the Camp of the Sacred Stones general operating fund here.

Donate to the Camp of the Sacred Stones legal defense fund here.