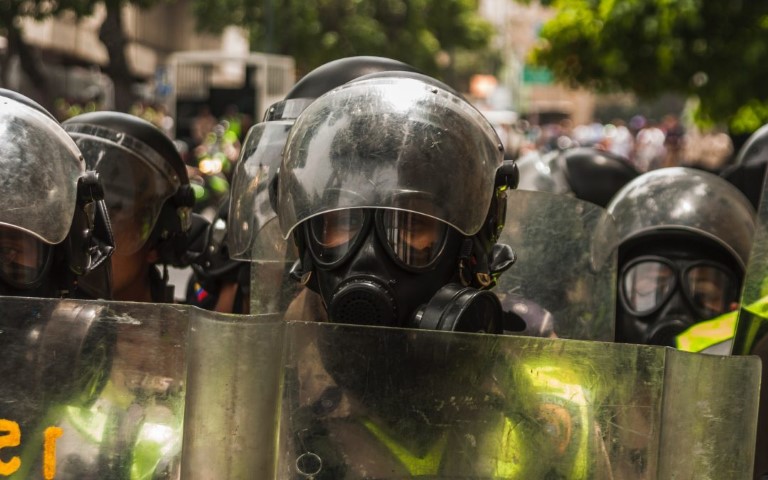 Honor the Earth’s position on Resolution 18-0674R, the Duluth Police Department’s (DPD) request to purchase riot gear, is informed by the resolve of communities of people of color, Native Americans, the homeless, LGBT people, those that suffer disproportionate levels of police violence, and  water protectors in particular.

Honor the Earth asks: (1) The Duluth City Council to leave this matter on the table and if it comes to a vote, vote no; (2) that Mayor Larson deny this request should it reach her desk; and (3) that a fully transparent community engagement process occurs, taking the time necessary to review and account for all information, questions and concerns gathered.

While the Citizen Review Board (CRB) compiles public comments and awaits requested crime statistics and FBI data, which should inform this process, a defensible rationale as to where these hypothetical future riots might come from has yet to be presented. At recent public forums, vague statements about the high volume of contact between the public and the police in the the current national climate have been cited as justification.

We recognize police officers have a tough job. If the DPD aims to protect themselves and the public, this is not the way to do it. Resources can be better spent to truly make our communities safer, like in the case of the Faribault-based drug task force that recently sized over 170 pounds of methamphetamine with an estimated value of $7.75 million, one of the largest busts in Minnesota history.

With the passing of a 2016 Duluth City Council resolution opposing the use of excessive force at Standing Rock during the Dakota Access Pipeline protest, we are concerned about this proposed riot gear, particularly as tensions worsen over proposed Enbridge pipelines and mining interests. Now it is unclear where the city stands on the issue of opposition to excessive force as that peaceful protectors have begun to put their bodies on the line in nonviolent civil disobedience to protect Minnesota waters. Like the Sandpiper pipeline before it, we believe Line 3 will never be built.

The Canadian mining corporations infiltrating Minnesota have procured bad human rights records internationally, often allowing local police and private security contractors to operate with impunity. The PUC’s Line 3 permit guarantees a Canadian multinational corporation will cover any costs for Minnesota Law Enforcement Agencies (LEA) to quell resistance, including Fond du Lac LEA’s policing of its own citizens. If Minnesota’s new relationships are any indication, we may stand to be a bit worried about civil society.

Honor the Earth stands with the citizens who provided hours of public testimony and over 800 comments detailing the specifics of their concerns. Duluthians take democracy seriously and demand transparency and accountability as an integral part of the social contract. If the data being collected has no effect on the purchase, the process is ultimately toothless with false claims of transparency. If Duluth’s needless pursuit of riot gear is any indication of our future, we should wonder what a human life is worth in Minnesota, and whether the rights of corporations should supersede the rights of people.