Honor the Earth joined in a Coalition of Advocacy Groups Filing Request to Intervene in Enbridge Line 5 Case Pipeline.

May 21st 2020, Honor the Earth joined advocacy groups with, Midwest Environmental Advocates (MEA) requesting to intervene in a case that will determine whether multinational oil company Enbridge Energy receives authority from the state to condemn private property rights in order to complete a reroute of Line 5.

Line 5 is a hazardous liquid pipeline that conveys crude oil and natural gas liquids from Superior, Wisconsin to Sarnia, Ontario. The company has continued to operate the line on the Bad River Reservation despite expired easements and a legal obligation to remove the pipeline.

"Enbridge, which has not disclosed the cost of the proposed reroute, says it is negotiating with property owners, but hasn’t been able to secure all the necessary easements. The company has offered the Bad River tribe $30 million to settle the lawsuit. The tribe has asked for $45 million and for Enbridge to decommission the line or remove it from the Bad River watershed." (source) 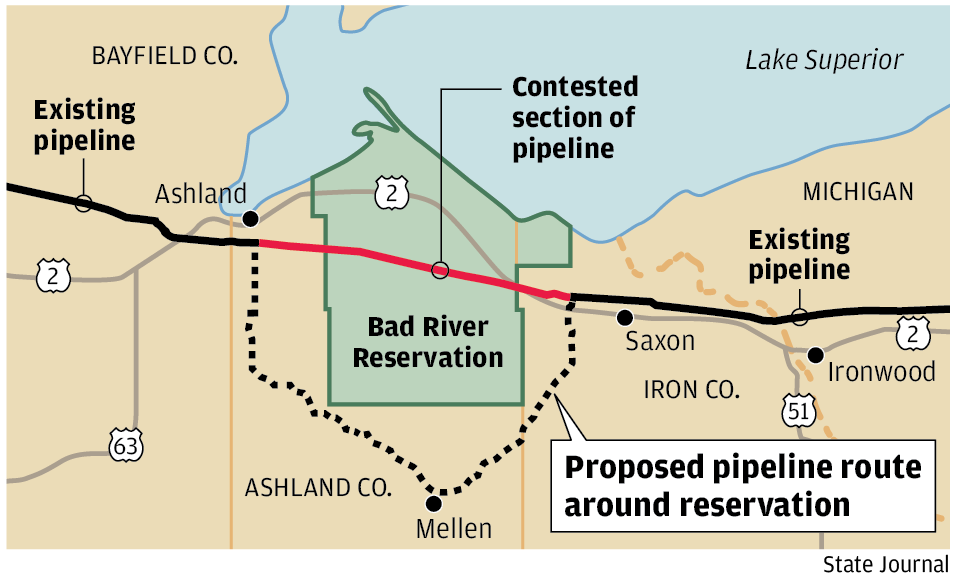 rights identified in its application, the PSC must determine that doing so is “in the public interest.” The organizations represented by MEA believe that the answer is clearly no and that the significant adverse impacts of construction and operation of the pipeline far outweigh any potential benefits to the public.

The five organizations are asking the PSC to conduct a full administrative hearing that will allow it to perform a meaningful cost-benefit analysis based on the actual and potential costs of the project. These include the adverse environmental costs of construction, the significant risks associated with a potential spill, and the catastrophic impacts to public health, the environment, and the economy that will result from continued reliance on fossil fuels.

“Giving a multinational energy company the right to condemn private property to construct a hazardous liquid pipeline is not in the public interest,” said Tony Wilkin Gibart, executive director of MEA. “The harm Line 5 poses to the climate, the water and the ecology of Northern Wisconsin and the Great Lakes region for outweighs any benefit.”

"Whether Enbridge's pipeline is in the public interest is clear,” said Elizabeth Ward, Executive Director of Sierra Club –

John Muir Chapter. “It threatens our waterway and other natural resources and takes us a step backward in reaching

our climate goals. We look forward to working with our partners, on behalf of our 18,000 members across Wisconsin, to make this case throughout the Public Interest Determination proceeding."

Winona LaDuke, Executive Director of Honor the Earth, added, “The Creator has provided an imperfect example of what a reduced fossil fuels use economy might look like: better air and water quality, clear canals and satellite pictures of industrial cities previously hidden by smog and pollution. We do this for the landowners, we do this for our children, grandchildren and the 7th Generation yet too come, but most of all, we do it because it is the right thing to do.”

Michelle Carlile of Superior Rivers Watershed Association said SRWA is concerned about “how the proposed project will have increased potential for significant effects on water quality, hydrology, and fishery health. The Superior Rivers Watershed Association’s position is that transportation of hazardous materials, including pipelines carrying oil, gas, and other toxic fluids, should avoid crossing Lake Superior’s watersheds.”

"350 Madison is dedicated to stopping destructive fossil fuel projects that endanger our health, communities, property rights and climate,” said Gail Nordheim, co-coordinator of 350 Madison. “The PSC should recognize that we are at a turning point and decide to take a stand against eminent domain for a project that would hurt us all." Visit the website of Midwest Environmental Advocates to learn more about this case.