On Earth Day, Mother Earth is going to get a lot of love from the Indigenous mothers, grandmothers, and others who are teaming up in song, spoken word, and video to push back against a new toxic, highly polluting tar sands oil pipeline. “Line 3” cuts through the heart of Native land and crosses more than 200 water bodies – including the Mississippi River twice – a drinking water source for millions of people downstream from the river’s headwaters, which begins in northern Minnesota.

The documentary-styled music video premiered on RollingStone.com on April 20.

Revealing the powerful efforts of water protectors to #StopLine3, the supporting music video is an action-packed mini-documentary, shining a spotlight on the Indigenous women-led resistance to the tar sands pipeline. Produced by Honor the Earth and Pickett Pictures, it is directed by award-winning filmmaker and photographer Keri Pickett and posted to the Honor the Earth YouTube channel  will also be released underscoring the battle on the land and water and in the courts to #StopLine3.

Despite active, ongoing lawsuits in the Minnesota Appeals Court and in a Federal district court in Washington DC, the highly polluting pipeline is already half built.  Line 3 is owned by the Canadian multi-national, Enbridge, Inc., and dissects the heart of Anishinaabe territories and the most pristine and complex watersheds and ecosystems in the Land of 10,000 Lakes, including Lake Superior. 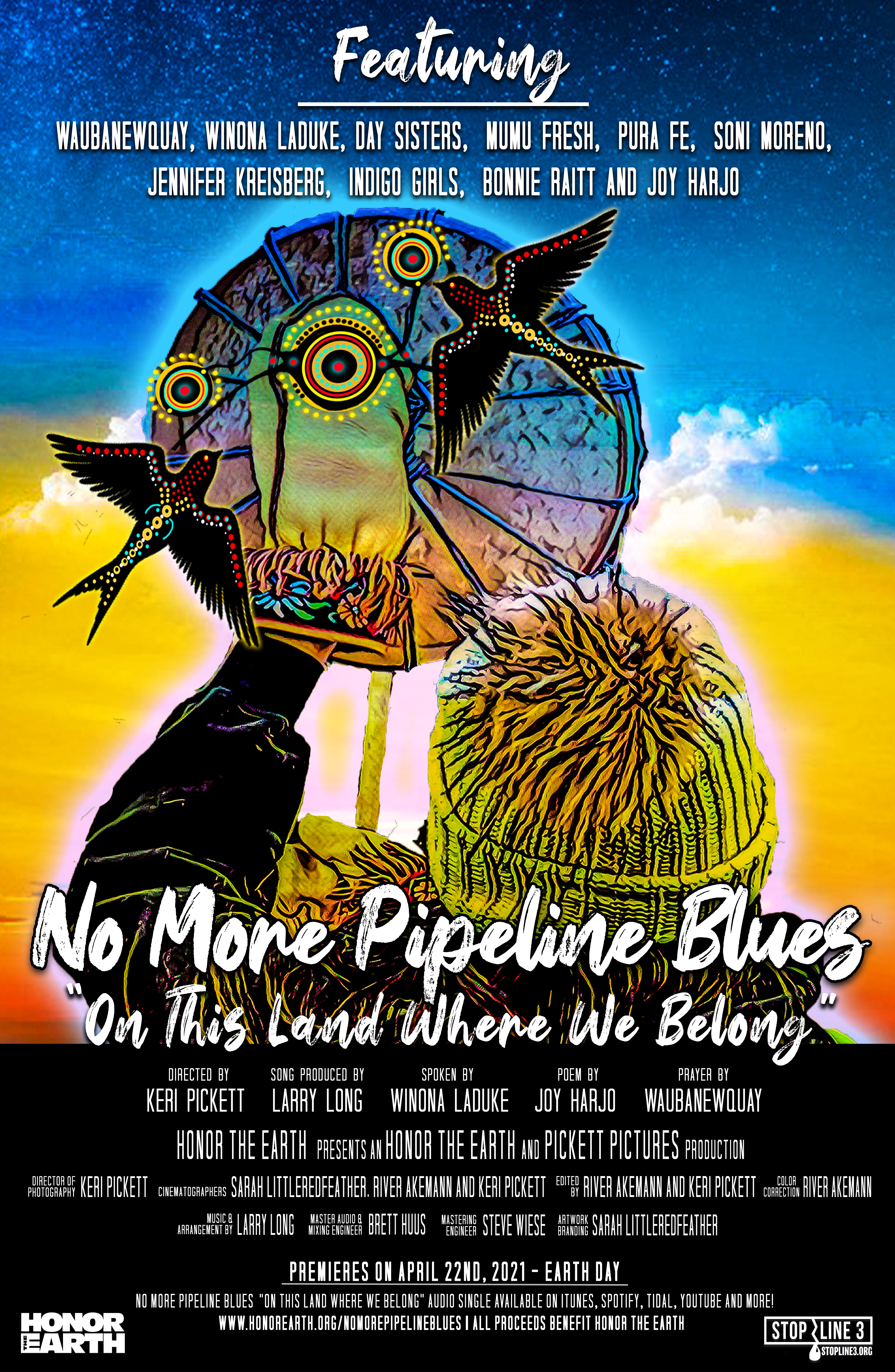 With the “No More Pipeline Blues” (On This Land Where We Belong) music video, we share the beauty of the pristine waters of northern Minnesota, the inspirational leadership of indigenous women and the courage of “water protectors.” Filmed over a four-month period by Honor the Earth media artists Sarah LittleRedFeather, River Akemann and myself, Keri Pickett, the footage reflects the spiritual, serious and sometimes unconventional methods used to halt construction of the Enbridge tar sands oil pipeline. From the December 2020 arrival of more than 4,000 workers during the height of the pandemic, the film shows how severe cold, Covid-19 and the coordinated invasion of county and state police have not deterred local resistance against Line 3 by those who believe that it threatens northern Minnesota’s water supply and that ‘water is life.’ As the song sings, ‘No more, no more, no more pipeline blues. Don’t let Line 3 come through!’" — Keri Pickett, - Producer with Honor the Earth, Director and Editor 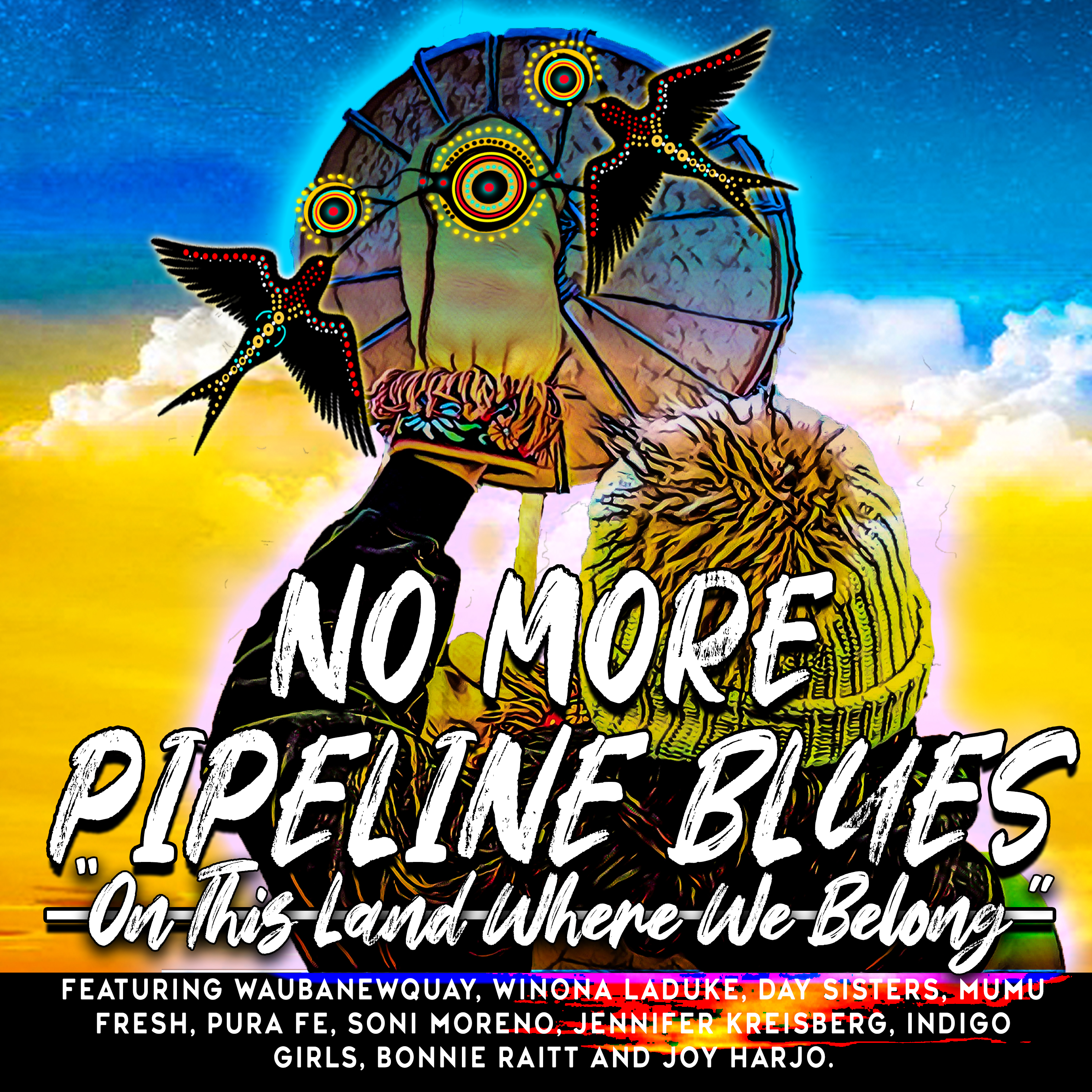 Special thanks to Keith Secola and Max Gail for their advice and support.

“’No More Pipeline Blues’ beautifully illustrates in music, singing, spoken word and images the threats of a totally unnecessary tar sands pipeline at the end of the age of Big Oil. But it also illuminates the sacredness of our environment, and yet more destructive, historical impacts to Indigenous culture. Still, the song and the music video are also like prayer offered in ceremony, asking for strength, justice and preservation.”  – Winona LaDuke, Honor the Earth

“I have been following and joined Winona years ago on the ride against Enbridge’s Line 3. I have listened and learned a lot and saw the many communities, lands and water and fish life and the food life that would be affected if this pipeline should so much leak, let alone break.  The song says it all. It would kill everything...and we cannot drink oil. Always we hope our creative endeavors reach the masses with the message of stopping the destruction of life for all and solution.  It's what we can do as artists to help support, as women, as Indigenous people to protect the Earth.  I don't understand the disregard for life. This is the time we really need all people to stand up together and make this change.” – Pura Fé, Tuscarora & Taino Nations

“Line 3 is a brutal, last gasp of a dying industry, proposed to desecrate indigenous lands with catastrophic environmental impact all in the name of short-term profit.  ‘No More Pipeline Blues (On This Land Where We Belong)’ brings together many different voices to sing and speak out against Line 3. My hope is that people will hear this song and be stirred to action to come out against Line 3.”  – Emily Saliers, Indigo Girls

“Honored to be part of this project that honors the earth. The earth asks so little from humans. Honoring properly is the least we can do.” – Joy Harjo, 23rd Poet Laureate of the U.S.*

"I've been involved with Honor the Earth and their work protecting Native lands and water since the early '90s. With the climate crisis beyond it's tipping point, the movement to stop these destructive and unnecessary fossil fuel pipelines is crucial and deserves more attention than it's getting. We can join the worldwide shift to developing renewables, ensuring the protection of our environment, the creation of thousands of jobs, and lessening the risk and trauma to both Native communities and the whole Great Lakes region.  I'm hopeful 'No More Pipeline Blues (On This Land Where We Belong)' will bring more awareness about the need to Stop Line 3 and capture the attention of Minnesota Gov. Tim Walz as well as President Biden, who have the authority to stop construction of the pipeline until ongoing environmental litigation is settled." – Bonnie Raitt

“The Mississippi River’s watershed flows through one-third of the United States and two Canadian provinces.  Her water’s flow 2,551 miles south from Lake Itasca in northern Minnesota to the Gulf of Mexico.  The name Mississippi comes from the Anishinaabe Ojibwe word ‘Messipi’ or ‘Mee-zee-see-bee,’ which means ‘long deep river.’  Everyone on this audio recording contributed their time and talents to protect these waters -- none of which could be made possible without the endless hours of in-kind support from Master Audio & Mixing Engineer Brett Huus. May this song help make a difference.  Thanks for all you do.”  – Larry Long, Producer & Composer

“Why do we have to fight to save water when water is life? I hope our work will arouse the populace to think then act to save our water before it's too late.” -- Sharon M. Day, Singer, Executive Director. Indigenous Peoples Task Force

As Featured in Rolling Stone magazine:
Bonnie Raitt, Indigo Girls Appear on 'No More Pipeline Blues (On this Land Where We Belong)

The song will be available on multiple platforms for streaming including iTunes, Spotify, Tidal, YouTube and more!

All proceeds from the new single will benefit the environmental justice non-profit, Honor the Earth, co-founded by Indigenous leader Winona LaDuke and the Indigo Girls 28 years ago. The featured artists on “No More Pipeline Blues (On This Land Where We Belong)” include in the order of their contributions within the song:

For more information – or to interview the artists featured in “No More Pipeline Blues (On this Land Were We Belong)” and or to discuss Line 3 issues” – please contact Martin Keller, Media Savant Communications, 612-729-8585, [email protected], @mediasavant