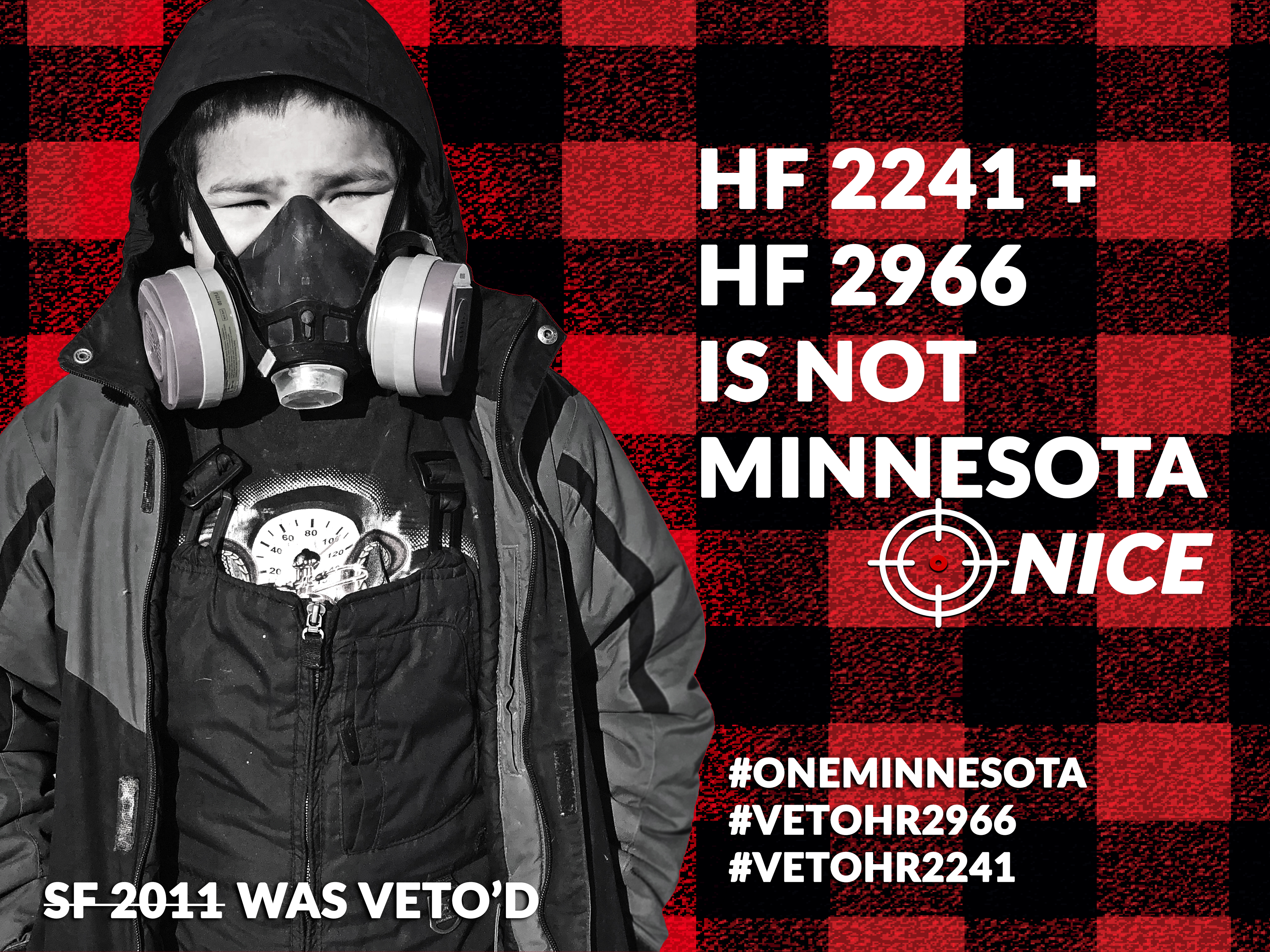 For the past seven years, the Anishinaabe have been challenging tar sands oil pipelines and mining projects which will destroy our wild rice. We have tried every legal and regulatory process, and are faced with the fact that Enbridge and Polymet are buying political influence. Native people and other Water Protectors will be arrested, just for protecting our water. To be a water protector is not a criminal act. To destroy our water and our wild rice is criminal.

Over the past year, local sheriff departments have been amassing riot gear and the north is getting militarized . Duluth purchased over $84,000 worth of riot gear, and many small town is gearing up. Native people already represent a disproportionate amount of people in prison in the north, and in a time of climate crisis and the need to protect our water and wild rice. Tribal leaders must stand for our water and our people.

Since the powerful protests at Standing Rock and of the Keystone XL pipeline, over 20 states, with coaching from oil companies, have introduced legislation attempting to silence peaceful protesters— specifically targeting pipeline activists on the frontlines of the fight for climate justice. These so-called “critical infrastructure” laws increase penalties for people speaking against fossil fuel pipelines, like Enbridge’s Line 3. Most recently, the South Dakota anti riot bill has been overturned by the state court. Wisconsin has just passed a similar bill, targeted at Ojbwe’s and others who oppose Line 3, and the Back Forty Mine project.

SF 2011/HF 2241 make it easier for Minnesotans to be charged with a felony by changing the phrase “significantly disrupt” to simply “disrupt,” which unnecessarily lowers the bar for a felony charge to insignificant disruptions. This bill would raise the legal risks for Minnesotans engaging in expressing free speech near any “critical infrastructure.” A variety of past peaceful public expressions of support for workers’ rights and environmental and racial justice would have been felonies under this proposal. This is overly broad and harsh.

In Minnesota, former Governor Mark Dayton vetoed such a bill in 2018. But lawmakers have introduced similar bills in the 2019-2020 legislative session. SF 2011 and HF 2241 are currently assigned to committees and expected to receive a hearing in the spring of 2020. Deceptively titled, the Worker Safety and Energy Security Act would increase penalties for protests near pipelines, utilities, and “critical public service facilities.”

This is targeted particularly at Native people.

The bills are designed to intimidate individuals, communities, organizations and Water Protectors from lawfully exercising their First Amendment and other fundamental rights. They would criminalize trespass on oil, gas, utility, railroad, and other properties—including those under construction—as a gross misdemeanor punishable by one year in jail and a $3,000 fine. Trespass, “with the intent to disrupt the operation or provision of services” by the pipeline or utility, would become a felony punishable by up to five years in prison and a $10,000 fine.

The bills would allow a court to order anyone convicted of such offenses to pay for “the costs and expenses resulting from the crime.”

These Bills Encourage Lawsuits Against the State

Minnesota already has laws criminalizing property damage and trespass, including on pipeline property. There is no need to create new crimes with severe consequences and lower defendant culpability. The bills are likely to encourage arbitrary and discriminatory enforcement, laying the groundwork for a constitutional challenge. Similar laws are being challenged in Louisiana, and were partially nullified in South Dakota. More suits are expected in the near future.

It’ time to protect our future. Please write the governor directly and tell him that tribes do not support this bill, prepare to testify on behalf of your people, and tell our state representatives that this will not be tolerated. Unjust laws are wrong, and our people deserve better. It’s an election year, and 2020 is the time to bring enlightenment, good jobs and positive thinking to the country, and this state.

It’s a time to honor our constitutional rights and protect our water. It’ time to protect our future

Free speech is the critical infrastructure of our democracy.

It’s an election year, and 2020 is the time to bring enlightenment, good jobs and positive thinking to the country, and this state. It’s a time to honor our constitutional rights and protect our water.

CONTACT THE AUTHORS OF HF 2241 + HF 2966 TELL HIM THAT YOU DO NOT SUPPORT THIS BILL, AND PREPARE TO TESTIFY ON BEHALF OF ALL OF US.

HF 2966 seeks to chill dissent and free speech by penalizing individuals or organizations who attend or support a protest where critical infrastructure is damaged. The language for this bill comes directly from the corporate-backed American Legislative Exchange Council (ALEC). The bill uses excessively broad language in creating penalties to anyone who “recruits, trains, aids, advises, hires, counsels…” while applying those penalties in a narrow and politically motivated manner only at selectively-defined “critical infrastructure” sites. Opposition to this legislation has been broad and included organizations working for free speech and civil liberty, Native American rights, environmental organizations and unions.

I urge you to oppose the Felony Free Speech Bills: SF 2011/HF 2241 and HF 2966. These bills would have a chilling impact on the constitutionally guaranteed free speech rights of Minnesotans.

Free speech is the critical infrastructure of our democracy. We must avoid taking actions that would suppress free speech or make Minnesotans afraid to exercise their constitutionally guaranteed rights.

We will have LIVE updates. 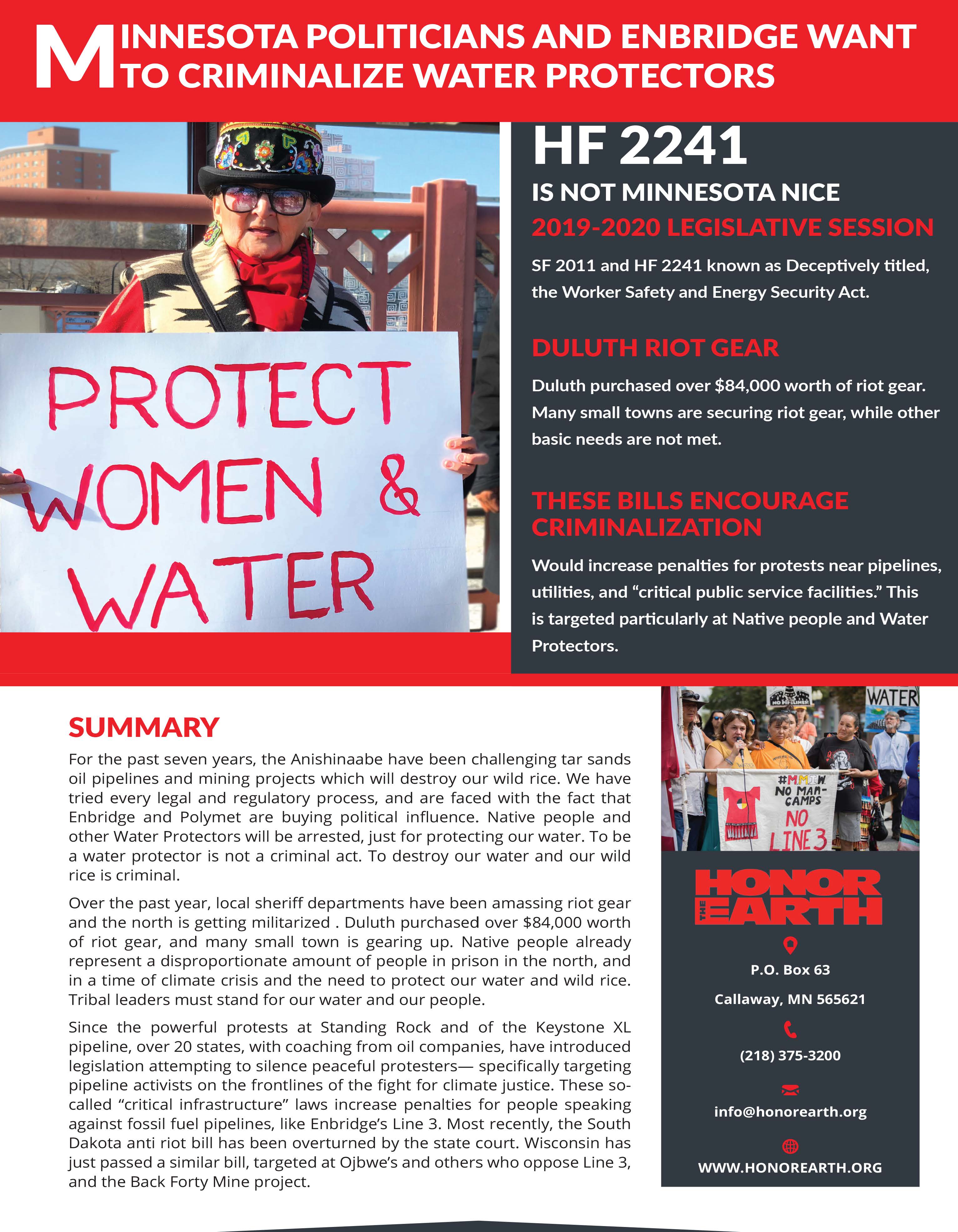 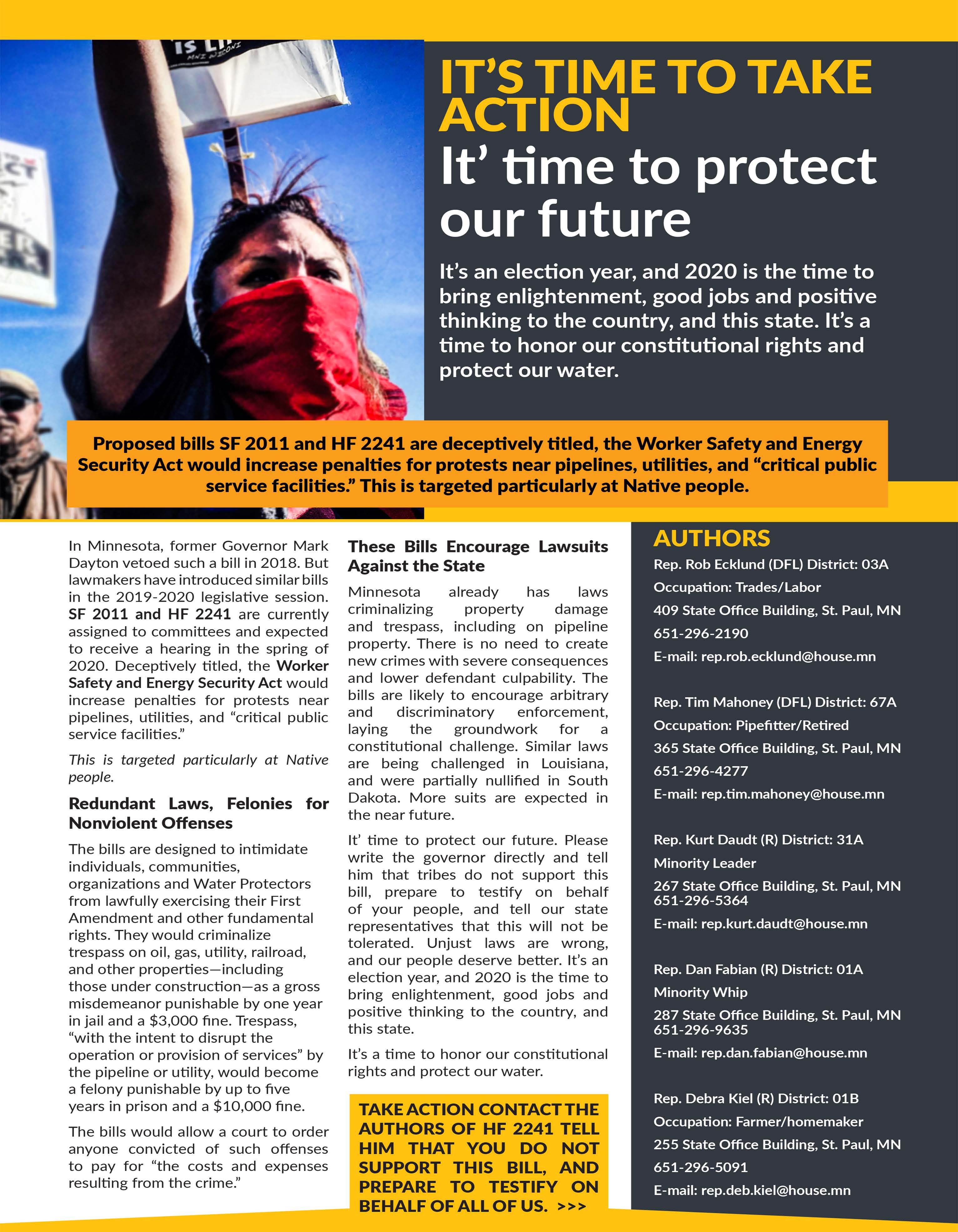