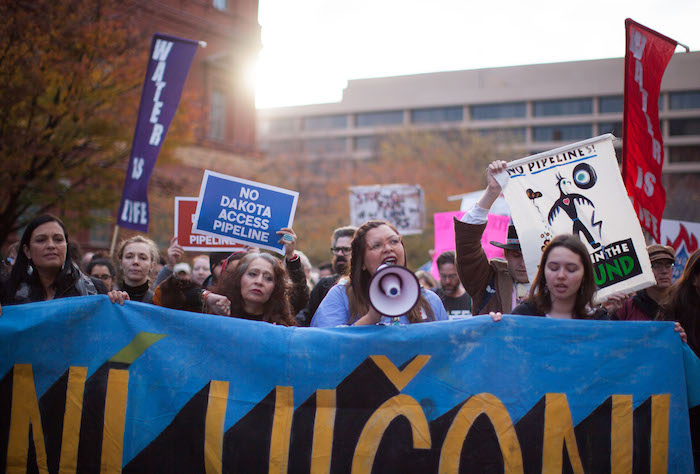 photo: Eman Mohammed - LaDonna Allard with Sacred Stone Camp, and Eryn Wise with the Indigenous Youth Council leading a march of 3,000 people in Washington D.C. as part of 300+ actions yesterday.

"...Thousands of people rallied together across the globe to oppose the Dakota Access Pipeline, the US Army Corps of Engineers issued a statement saying that the decision on the pipeline will be further delayed for more consultation.

Normally, this would be a good thing: delay is often our friend. But, these are not normal times. Donald Trump is going to be President in 65 days and delay could give him the power to decide Standing Rock’s future. We need fast action, and the kind of action that will last. Dakota Access has proven that is has no concern for corporate responsibility and common decency."

President Obama has the power to stop the pipeline, protect Standing Rock’s water, and take the decision out of Trump’s hands.

Why Police From 7 Different States Invaded a Standing Rock

Click here for the Petition: Tell President Obama to stop Donald Trump from deciding the future of Standing Rock’s water and stop the Dakota Access pipeline by rejecting the final permit for the project.

"People are tired of being treated like third-class citizens," says Winona LaDuke, founder of Honor the Earth, in the short film.

"...show the world how we must live," for our Mother Earth and Future Generations :: Mni Wiconi. Water is life. Hear our story. Stand with us. Tell Obama #NoDAPL, DENY the easement. Call the White House today at 202-456-1111 or send a message to whitehouse.gov/contact. “This film tells the story of our prayerful and peaceful demonstrations by water protectors that have motivated thousands of tribal members and non-Native people around the world to take a stand.” — Standing Rock Sioux Tribe’s Chairman, Dave Archambault II. For more information visit standwithstandingrock.net