Major Milestone for the Cree Nation -

Honor the Earth is absolutely thrilled that after two centuries, sacred ceremonial item, a rare beaded hood, survived centuries away from the Cree Nation, have finally been returned to the Cree Nation. Just as should be so.

"It's like meeting my Gookum [grandmother]," she said. "This is how I feel when I see it. My mom told me a story about how my grandmother used to wear the beaded hood on special occasions."
"They had a deep ceremonial value and were an important part of [Cree] tradition and community life," Pash said.
"We know that women had to be chosen to be hood bearers... and had very special teachings passed on to them." 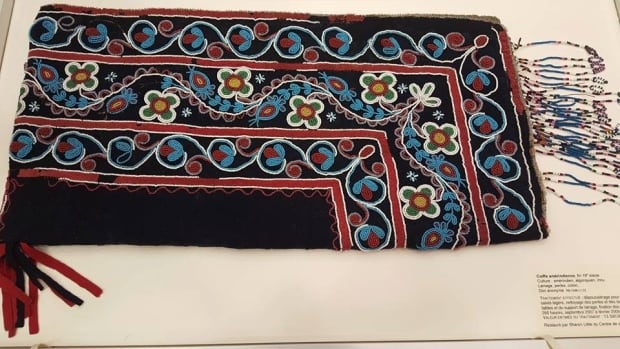 The beaded hood. The traditional garment had a strong connection to Cree tradition, and were worn for ceremonial purposes, such as changing camps or for marriages. (Celina Wapachee/CBC)

"...This hood was found by ACCI researchers in the collection of the Montreal-area Musée de Lachine, where it has been for the last 65 years. Before that, it was part of a private collection owned by Fred Russel Hamilton..."

When the Lachine museum acquired the hood, in 1948, it was in poor condition.

"It was damaged. Mites had gotten to it," said Dominique Chalifoux, a curator. "We had to get it restored in order to show it."

Trifona Simard, Jane Gunner's great-granddaughter, works at ACCI and was on hand for Monday's ceremony. It was a chance conversation between her and researchers at the institute that helped make the connection.

"My mom started sharing her memories about it, remembering the beaded hood," said Simard. "She had never talked about it with me before."

Must see Video of the community seeing the rare sacred hood for the first time outside it's glass box container.