Winona LaDuke Among 7 Women Arrested Today at the Shell River AMID GROWING DROUGHT CONDITIONS AND DANGEROUS THREATS TO AQUATIC RIVER LIFE, ENBRIDGE TO DRILL LINE 3 UNDER THE SHELL RIVER IN ANISHINAABE TREATY LANDS

HUBBARD COUNTY – July 19, 2021 -- Today women and other Water Protectors from across multiple communities in Minnesota sat together at the Shell River, near Park Rapids, Minnesota, in peaceful prayer to oppose the construction of Line 3, the largest tar sands pipeline ever constructed.  Seven women were arrested, and zip tied this afternoon – including Winona LaDuke, Executive Director of Honor the Earth. These women represent many others who stand in solidarity with the protection of water across Anishinaabe treaty lands. To date, over 500 people have been arrested expressing opposition to Line 3.

Line 3 will cross underneath the Shell River in five places. The women gathered at the Shell River today are acting in collective care of their communities, standing for the rights of the Shell River, and honoring treaty rights across the waters throughout Anishinaabe territories.

See video of standoff prior to arrests today: https://www.facebook.com/WinonaLaDukeHonorTheEarth

This is a Developing Story. 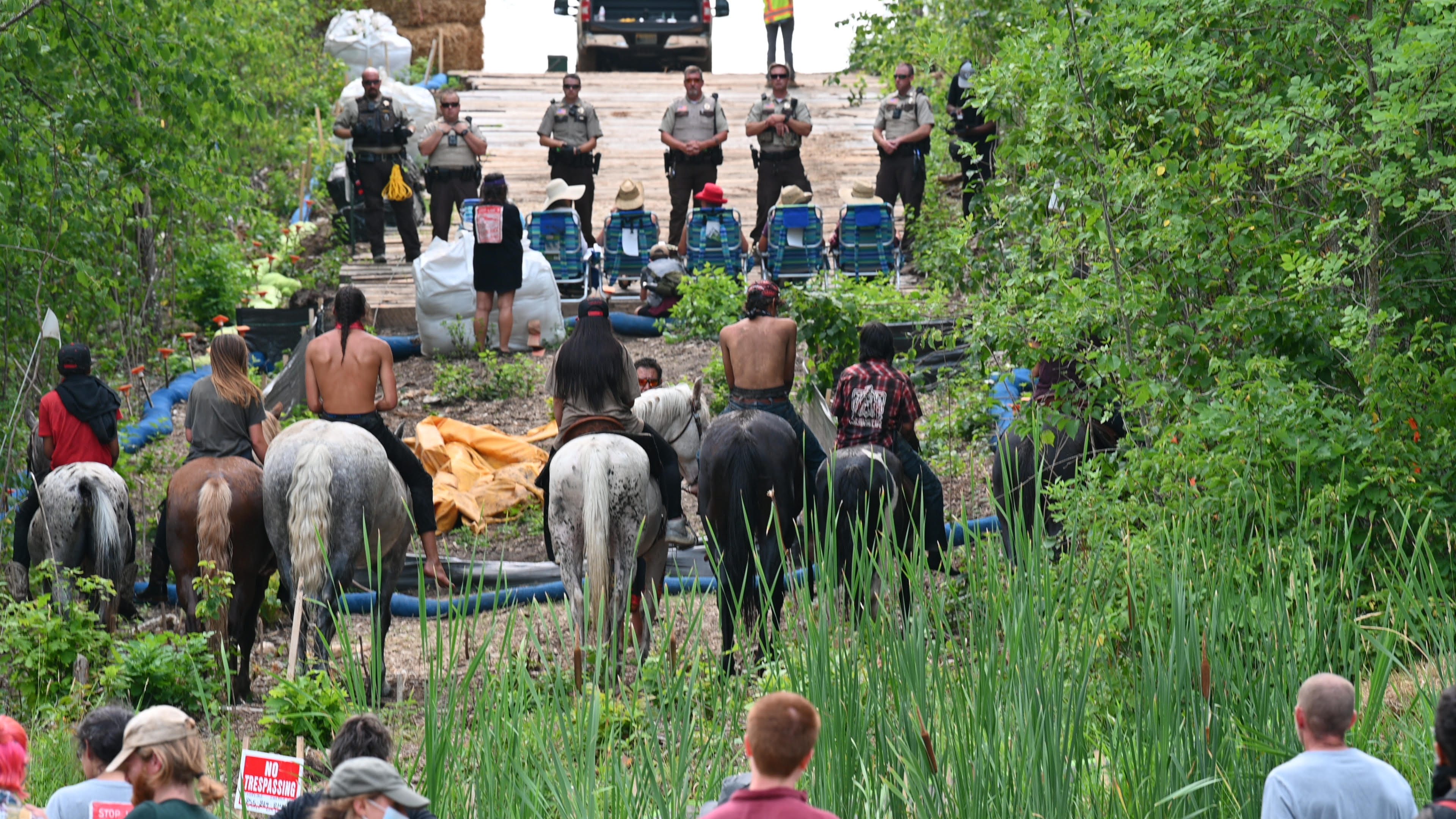 Enbridge, a Canadian transnational oil corporation operating out of the tar sands, has recently requested more water from Minnesota watersheds by amending the original permit requests. For $150 dollars, the Department of Natural Resources has allowed Enbridge to extract 5 billion gallons of water, during a severe drought throughout Minnesota. Currently, due to drought conditions and low water flow across the state, water permit suspensions have been enacted in some watersheds. Risks to aquatic river life, including large mussel clam beds, are dangerously high.

Other Threats to Aquatic Life in Adjoining Rivers like the Mississippi

In cooperation with the DNR, Enbridge circumvented the intent of the original permit and water appropriation suspensions by extracting water from watersheds across multiple counties, prior to these suspensions, to allow hydrostatic processes to continue during drought restrictions. These acts are an egregious misappropriation of the original permit agreements and are in direct violation of Anishinaabe treaty rights and ongoing stewardship.

The Mississippi River contains one of the largest freshwater mussel populations in the world, half of which are classified as Federally endangered. If a frac-out occurs along Line 3’s construction route -- like the one recently on the Willow River -- using horizontal directional drilling underneath 22 rivers across Minnesota, the mussels are gone. They cannot relocate. The river has a right to life, which is being threatened by Enbridge’s extreme dewatering and insertion of a tar sands pipeline.

Meanwhile, only yesterday 13 billion dollars was divested from tar sands development internationally. The mainstream media has largely been silent on the growing global divestment from the tar sands, given that it is the dirtiest and most expensive to produce carbon-loading oil on the planet.