We offer this Summer Newsletter​ as a brief update on our work to protect the sacred and lead the transition to a future with clean water and respect for human rights and Mother Earth.  We also invite you to review our 2016 Annual Report.  This is a time of tremendous growth for Honor the Earth, with new offices in Minneapolis and Duluth, and an incredible expanded team.

We continue to do anti-racist work in North Dakota, and support the legal defense of those arrested at Standing Rock, but we have turned our focus to Enbridge’s proposed Line 3 pipeline, which would pierce the heart of our territory in the Great Lakes, poison our water and sacred manoomin (wild rice), and threaten our very existence as First Peoples.  We cannot let that happen.  Our battle in the State of Minnesota is heating up, and resistance camps are emerging across the north as Enbridge begins construction in Canada this August.  We remain diligent on the regulatory, legal, media, and grassroots organizing fronts, and will also celebrate and build our resistance on the land and water this summer, with 2 horse rides along the pipeline route and a 250-mile youth-led canoe flotilla on the Mississippi River.

At the same time, we continue our work developing renewable energy infrastructure for tribal housing on the White Earth Reservation, building local food systems, leading cultural programs for our youth, and distributing small grants to other grassroots Native groups across Turtle Island working to protect their sacred sites and cultural traditions.

We are very grateful for your contributions, as we cannot do this work without you.  We ask you to support our work through either a one-time or sustaining monthly donation, or through purchasing our food products and apparel.   Our Indigenous Nations are rising.  Please continue to stand with us.  Chi-miigwech! 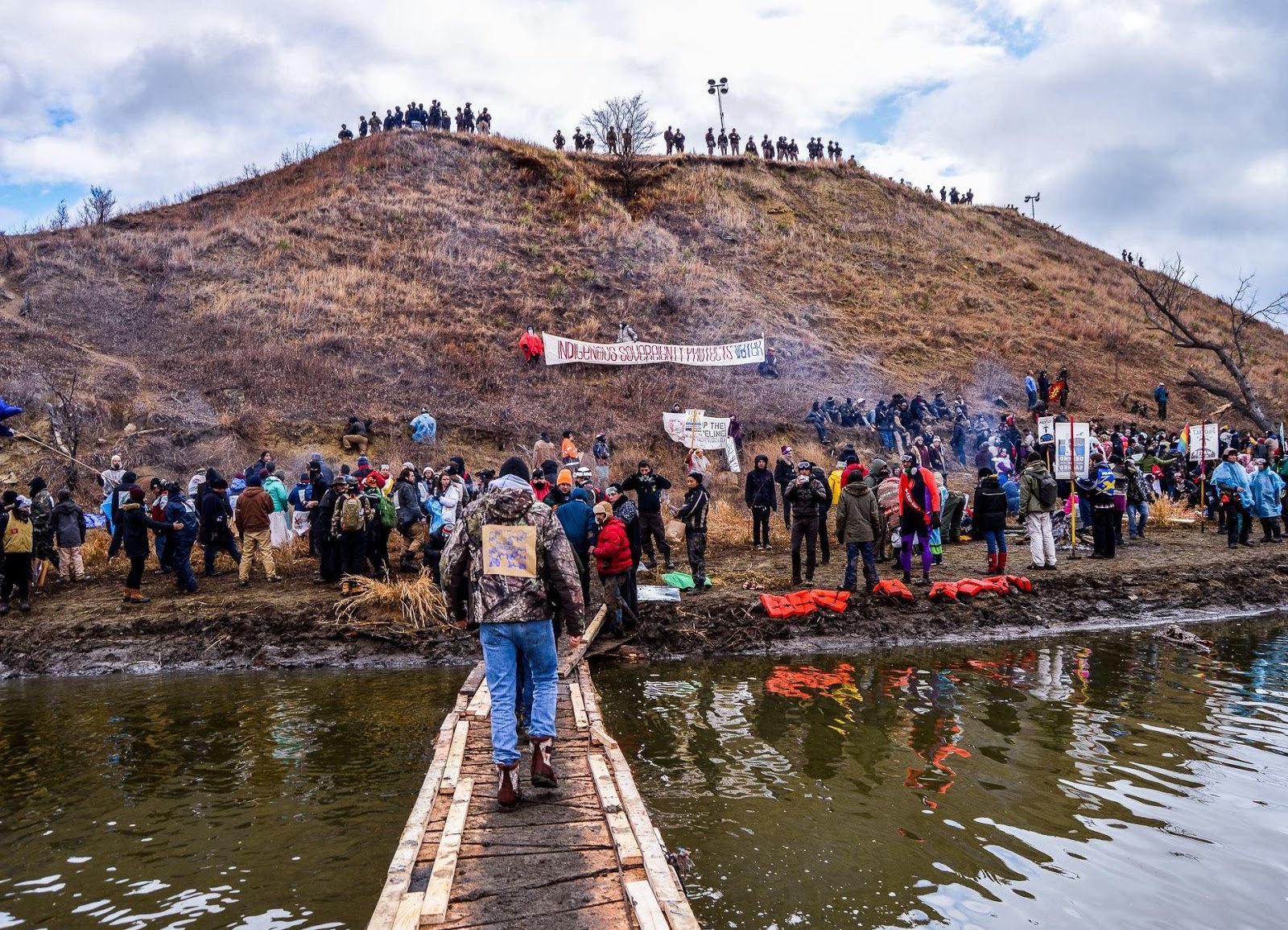 Before DAPL was operational, it spilled twice.  The frontlines are now in the courtrooms, and on June 14, a federal judge ruled partially in favor of the Standing Rock and Cheyenne River Sioux Tribes, finding that the US Army Corps had violated federal law by failing to adequately assess environmental justice and potential impacts on the treaty-protected hunting and fishing rights of the Great Sioux Nation.  At the next major court date in August, he will decide whether to shut down the pipeline while those issues are addressed.  Meanwhile, the nearly 700 water protectors arrested are facing their criminal cases and a mountain of evidence compiled by corporate paramilitary group TigerSwan.  Red Fawn was recently granted release and is awaiting space in a halfway house.  She is one of seven water protectors facing federal charges. 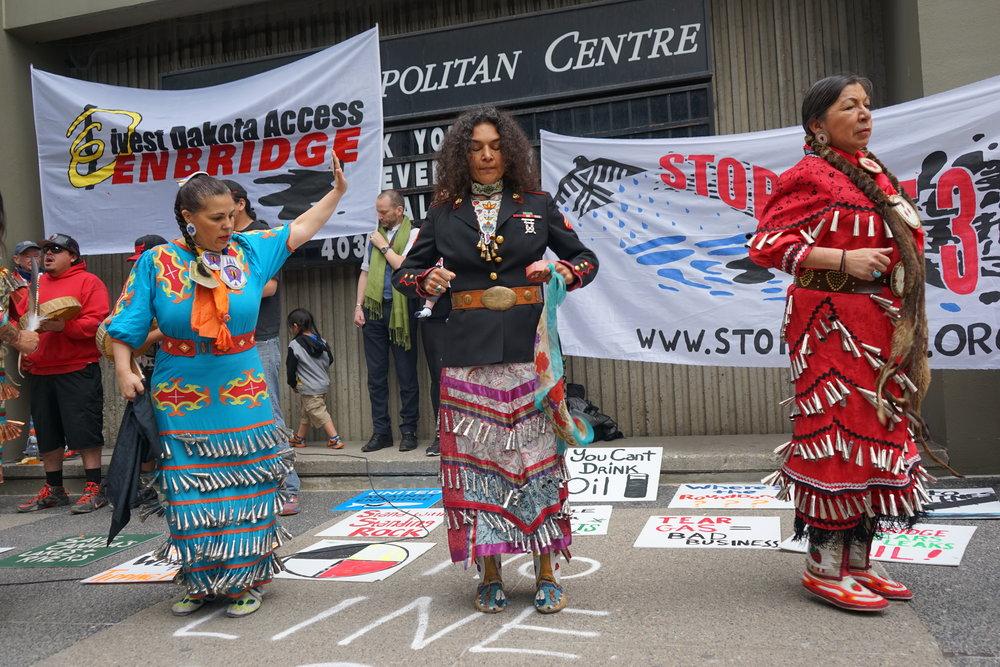 The Campaign to #STOPLINE3

We are fighting for our lives.  This spring we defended ourselves against a legislative attack by the newly dominant GOP that would’ve fast-tracked the pipeline.  Now we are critiquing MN’s profoundly inadequate Draft Environmental Impact Statement.  Alongside Honor the Earth and other environmental groups, all 5 directly impacted Ojibwe tribes are intervening in the State’s permitting process, as well as a courageous and powerful group of 13 youth.  We are preparing to assert our treaty rights at the federal level, and cultural and resistance camps are emerging in our ceded territories. Construction is set to begin August 1 in Canada, but we are stronger than ever.  Visit www.stopline3.org for more info, and follow “StopLine3” on facebook. 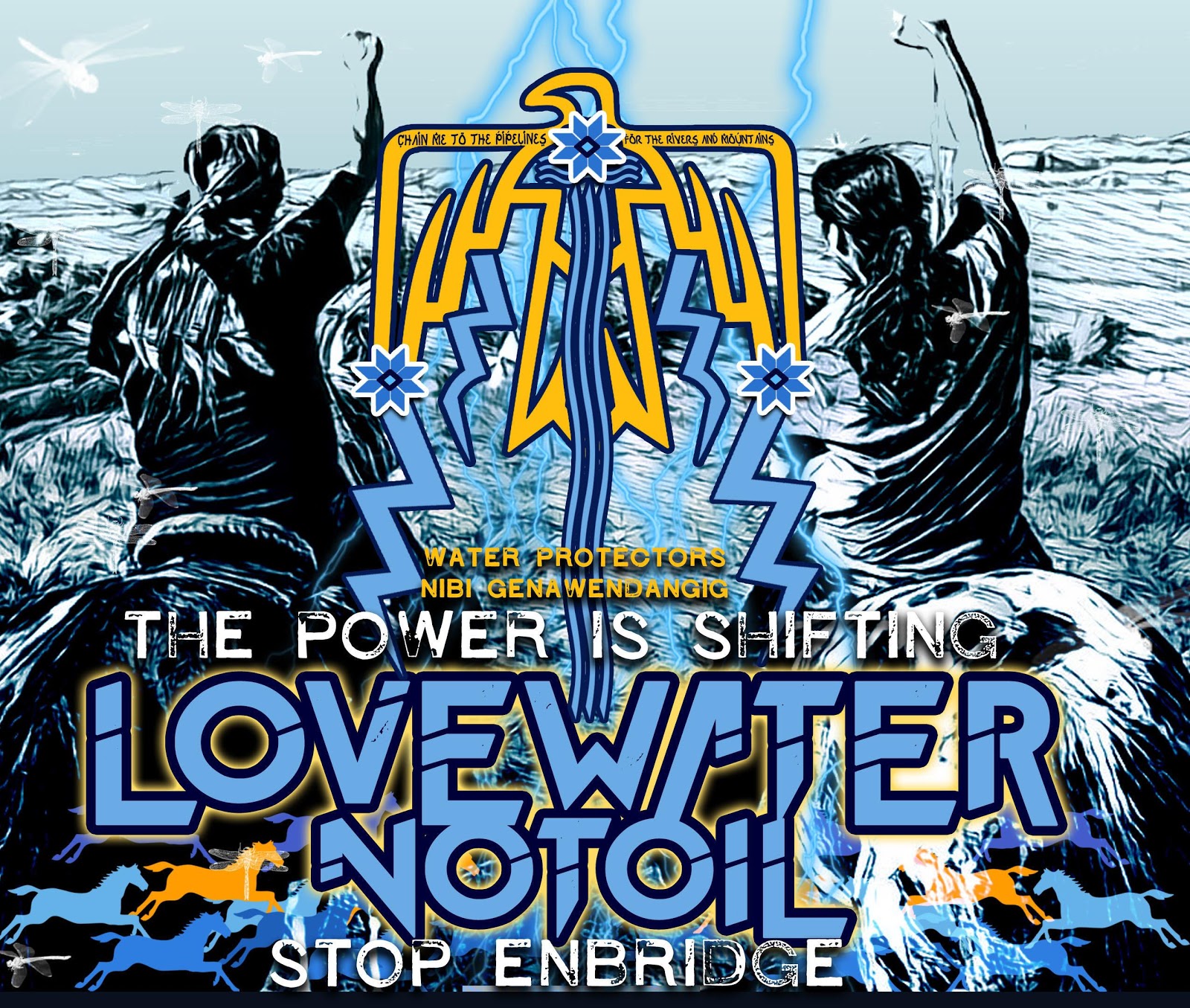 This summer we will ride horse against the current of the oil on the 5th Annual Love Water Not Oil tour, in both Wisconsin and Minnesota.  We are honored to be joined by riders from Standing Rock, Pine Ridge, Crow Creek, and Sisseton Reservations, including many from the Dakota 38 Bigfoot Ride, along with our Ojibwe and Ho Chunk relatives in Wisconsin.  Several amazing artists are offering their music, including Nahko Bear, Annie Humphrey, Gingger Shankar, Corey Medina, and Maria Isa, with special guests along the way. Concerts during the Wisconsin ride will be July 9th in Madison, WI, July 14th on Madeline Island and July 16th at Bayfront Festival in Duluth MN.   The Minnesota ride will be from late July to early August, with a celebratory Sioux Chef feast on July 30th in Baxter, MN, and a concert in Bemidji on August 10th.  We invite you to join us. 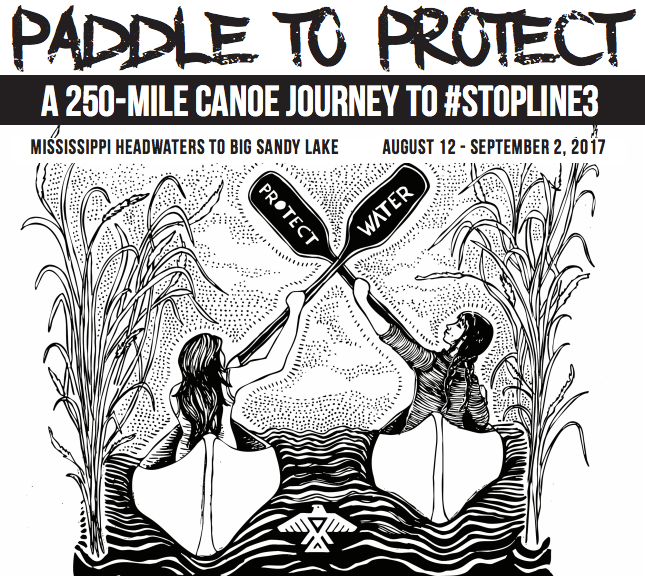 Paddle to Protect:  A Canoe Flotilla to #StopLine3

This August, a fearless group of Indigenous youth are leading the Paddle to Protect, a 250 mile canoe journey on the Mississippi River to #StopLine3.  We will paddle a traditional canoe route, from the river’s source to Big Sandy Lake, where hundreds of Ojibwe were starved to death by the US government in 1850.  Line 3 is proposed to cross the Mississippi in both places, but we will not allow that.   Our young people are standing up to protect Mother Earth and our future generations.  It is an honor to support them and spend time on the water we are protecting.  Please join us. 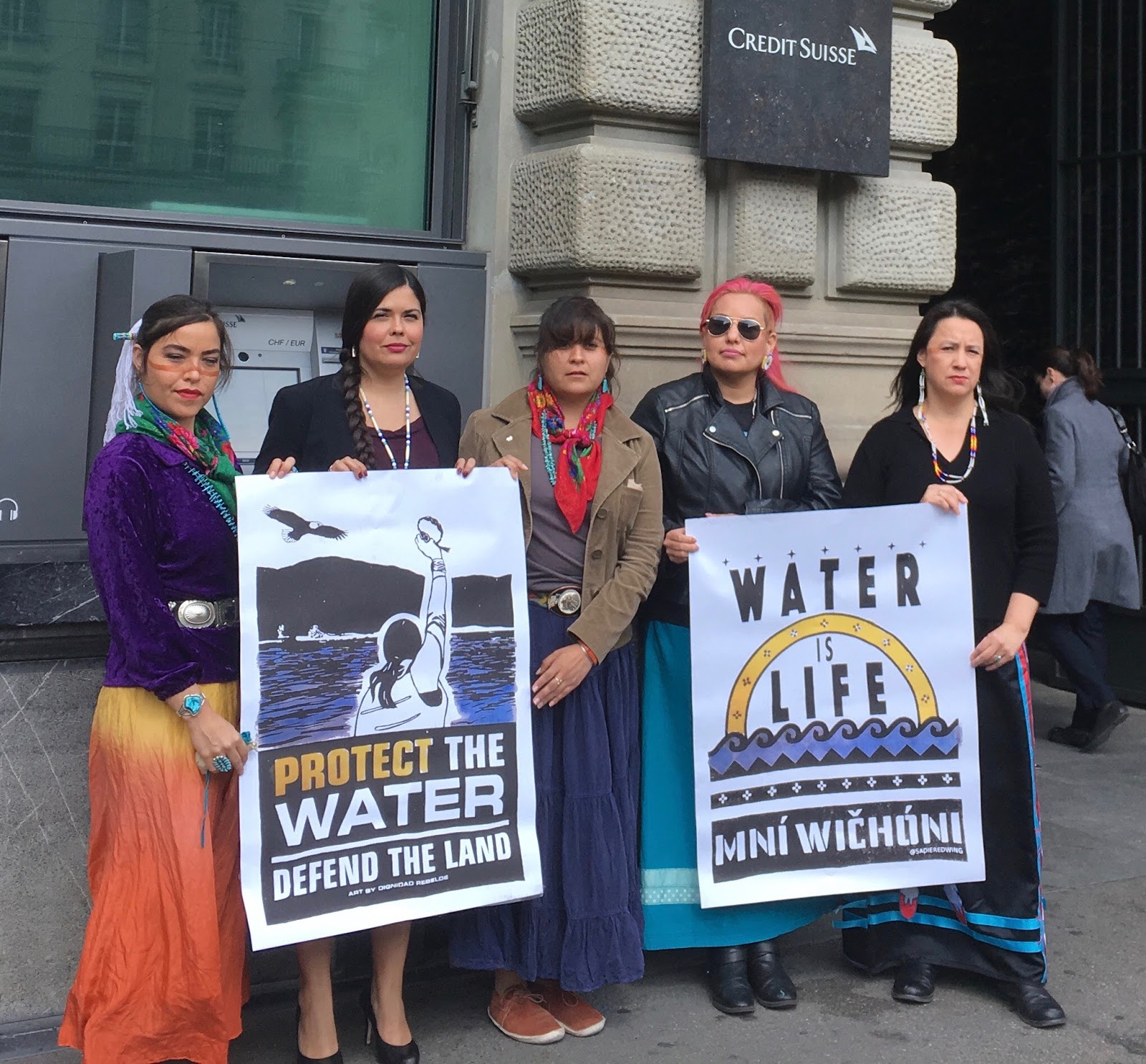 The fight to cut off funding to the black snake is blossoming.   Six major cities have divested billions from big banks, and individuals have moved millions more.  Several major banks have withdrawn from DAPL financing and committed to not fund Keystone XL and other tar sands pipelines.  In March, a delegation of Indigenous women from the #NoDAPL fight, including Honor the Earth’s National Campaigns Director, Tara Houska, traveled to Europe to meet with banks, the Norwegian oil fund, and the Norwegian parliament. In May, we launched an expanded divestment campaign against DAPL and all 4 proposed tar sands pipelines, in partnership with 5 other grassroots Native groups and the 121 First Nations and Tribes united by the Treaty Alliance Against Tar Sands. Learn more at: mazaskatalks.org 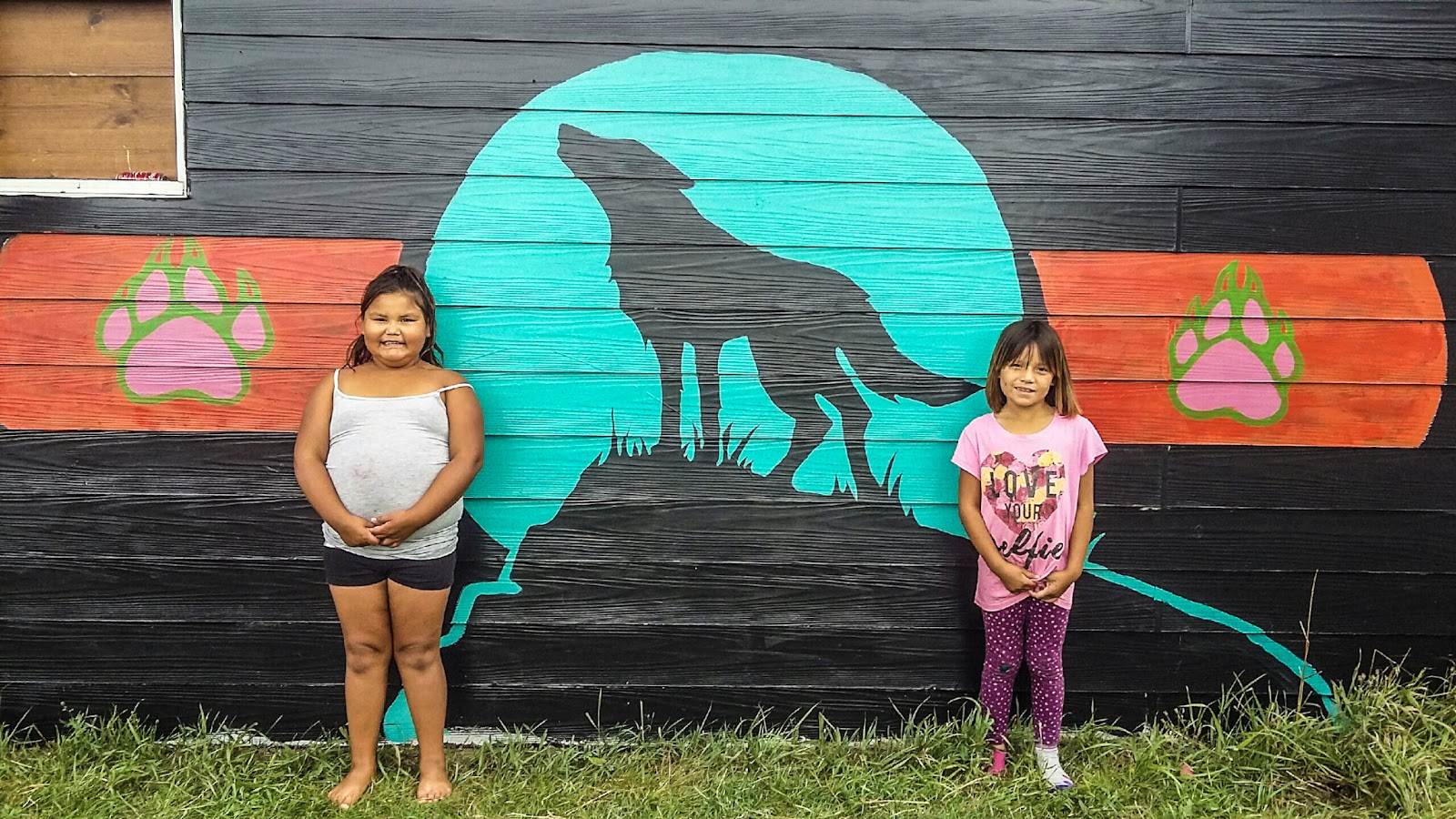 We are not just trying to end the fossil fuel era, we are also walking with open eyes and arms down a path that is green. Honor the Earth continues to install solar thermal systems in tribal housing on the White Earth reservation, and are making plans to install photovoltaic solar panels for one of our tribal schools. We have trained 20 people already to do this work, and plan to train 30 Indigenous women this fall. We are also developing our own solar thermal panel manufacturing plant, to maximize economic opportunities for our local people. We pair this renewable energy work with cultural programming focused on our youth - public art projects, lacrosse camps, language programs, regalia-making workshops, gardening, and more. 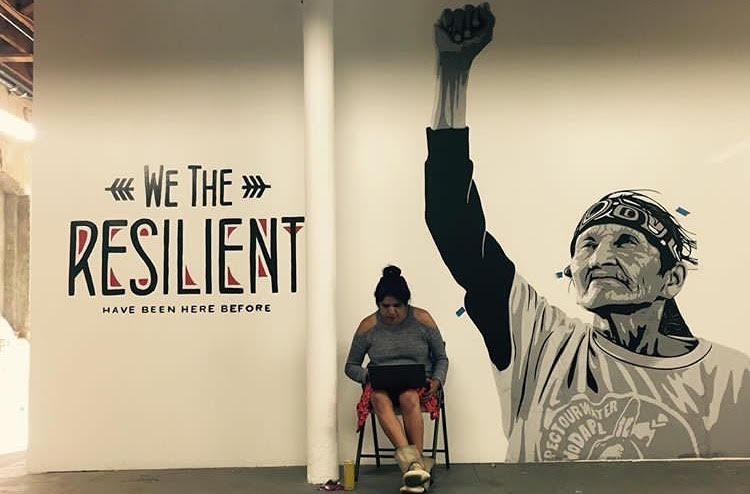 In June, Honor The Earth curated the 6th showing of "Art of Indigenous Resistance: Inspiring the Protection of Mother Earth", an exhibition with a mission to raise awareness about Native issues and support campaigns to protect land, water, and culture, through a showcase of empowering Indigenous art from across Turtle Island.  The art in this collection highlights Honor the Earth’s 31 years of work resisting developments that directly impact indigenous communities. The collection includes historical posters and original artwork curated from a national call to artists. Curated by Honor the Earth Board member Kimberly Smith, this exhibition features the work of leading artists and activist collectives from across the globe whose work creates awareness of the social, economic, environmental, and political issues that impact the health and resilience of indigenous people. Through art and healing self-expression, the exhibition seeks to spark dialogue on humanity’s interconnectedness with Mother Earth and support systemic change by highlighting indigenous practices and community-powered solutions. 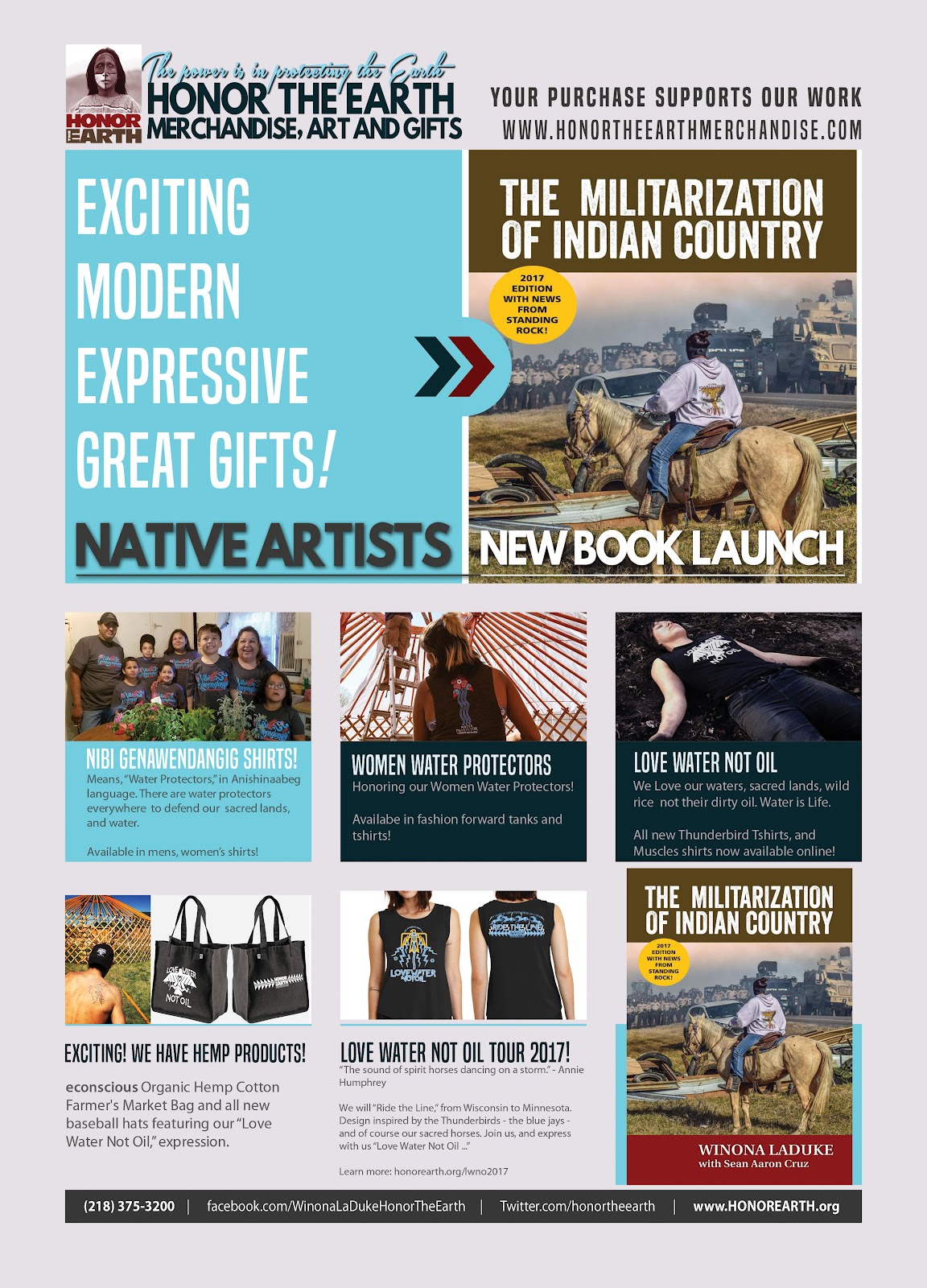